As a very avid comic book reader, I have had my ups and downs with emotions. Sometimes a story is written so well that I feel invested in a character to the point that I feel like I know them. This is true in any form of media, but I feel particularly close to comic books as it is what I have read the most about in the entirety of my life. Here’s a couple moments that I have literally balled my eyes out reading. 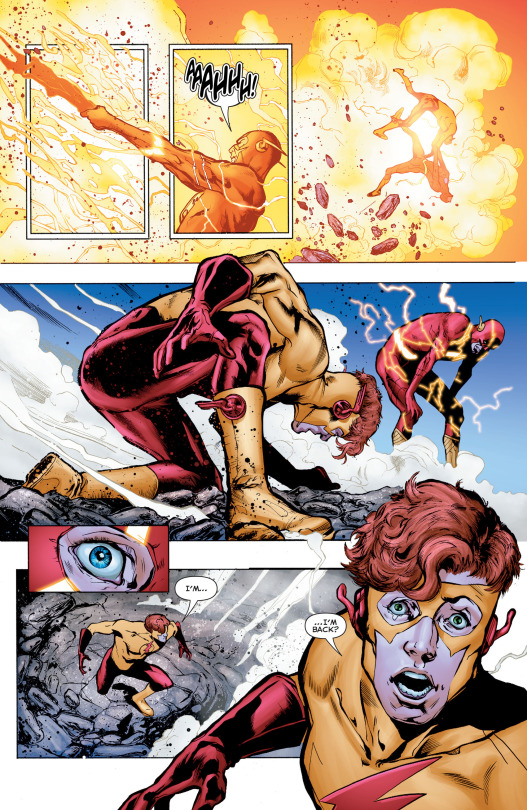 The return of Wally West in DC Universe Rebirth #1. This should be a no brainer. The New 52 DC Universe sucked. I abandoned ship myself nearly a year before this storyline. But Wally West returning along with the Pre-Flashpoint Superman in the previous year really opened many readers eyes and brought them back. Seeing Wally and Barry hug each other sealed the deal on this and made me feel like there was hope for DC Comics yet.

Speaking of Rebirth – Detective Comics #940 – The “Death” of Tim Drake aka Red Robin aka THE BEST Robin ever. It’s no secret that Tim Drake is my favorite superhero. He’s not my favorite side kick, he is my favorite superhero. Period. He was a nerdy kid that worked his way into the Batfamily and earned his place as being Robin. He wasn’t an acrobat, he wasn’t a tough street guy, he was a sociopathic killer son of Batman. He was very ordinary and close to being a stereotypical geek. It sounds lame, but as a kid I looked up to him and he gave me a lot of hope that I can a superhero one day too. His “death” affected me a lot. He was not killed. He was simply captured and put into a cell by the mysterious Mr. Oz, but the fact that he is taken off of the field and is still missing in the DC Universe during the Rebirth saga is something that is nearly just as bad. Everything that everyone is going through that is shaping their universe in a different direction will be missed by him. I do hope that when he returns, he will be just as awesome as he was before the New 52 messed up his character and hopefully have his real buddies back too. Young Justice Rebirth can and should happen! 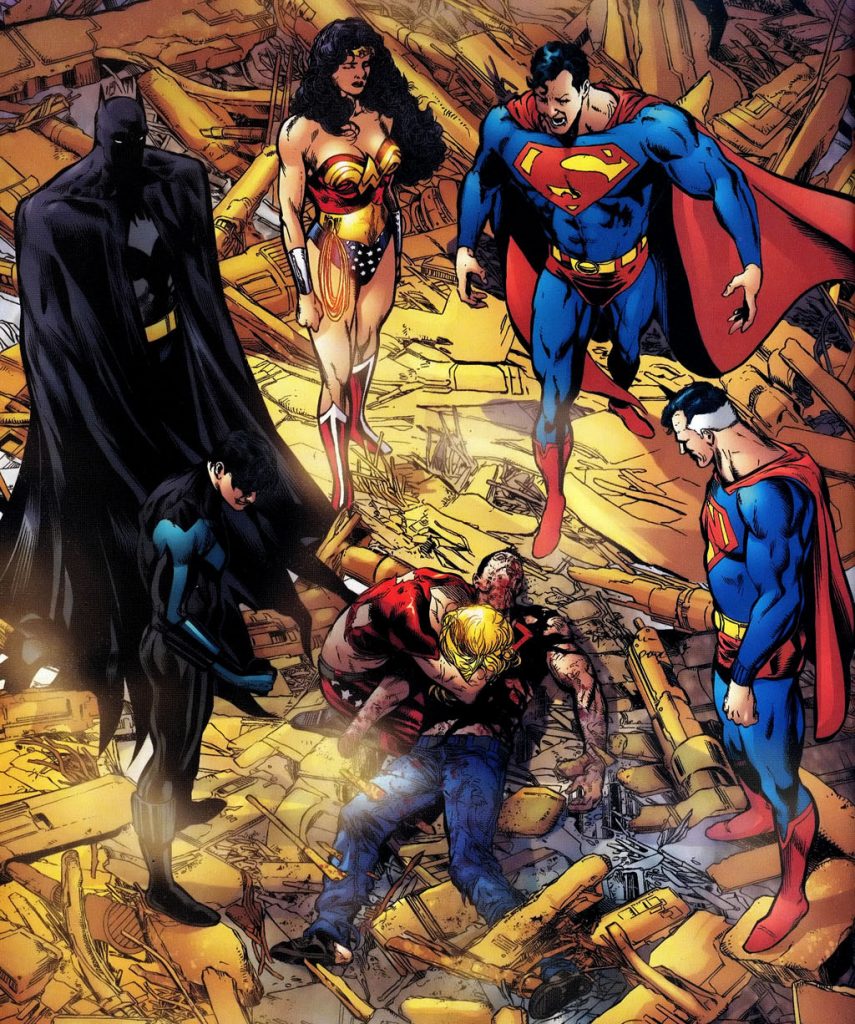 Infinite Crisis #6 – One of Tim’s bestest buddies/bromances is Conner Kent aka Superboy aka Kon-El. Superboy was treated horribly in the New 52 Universe and given a completely new origin. We pretend that that never happened. But during his time in Pre-Flashpoint, his name had been a thing contested in courts. Although DC stated that this was not reason for doing so, but he was killed off in the Infinite Crisis storyline. Tim was so distraught that he attempted to clone him to bring him back. His death in the arms of Wonder Girl was so depressing. 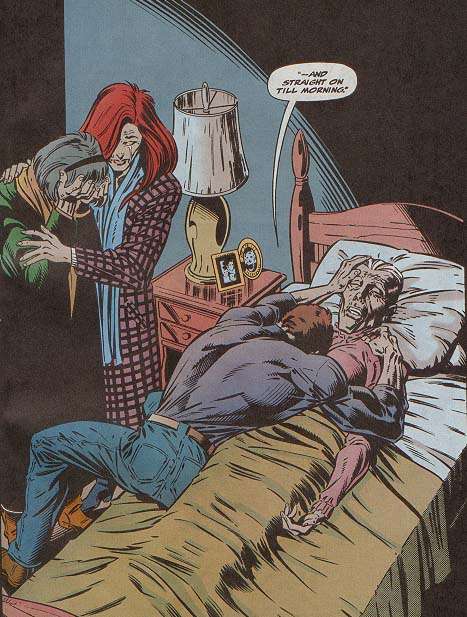 Amazing Spider-Man #400 – Death of Aunt May. She didn’t really die. Turns out it was an actress and it was staged, but for a while it was cannon. Of course Spider-Man’s history and the Marvel Universe as a whole has been altered, so this story may not even happened to begin with. But reading this as a kid, I did cry seeing May’s farewell. 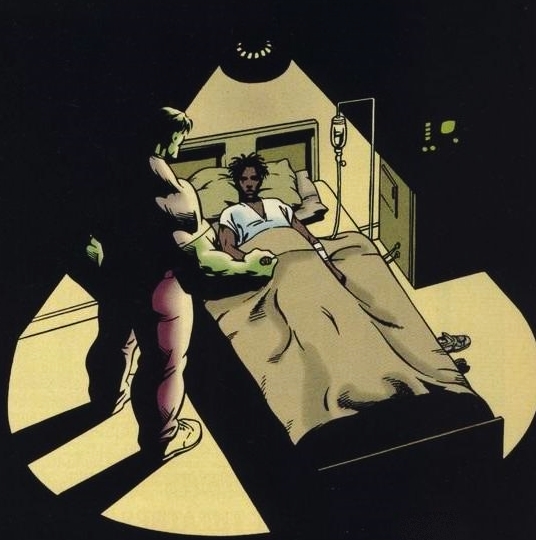 Incredible Hulk #420 – Death of Jim Wilson. This issue had long time friend of the Hulk, Jim Wilson succumb to having full blown AIDS back in 1994. To many at the time, being diagnosed with HIV was a death sentence. My own uncle passed from complications of having AIDS this same year. This issue has Hulk’s friend ask the Hulk for a blood transfusion to save his life. The negative aspect is that Jim could become a Hulk himself, similar to Jennifer Walters becoming the She-Hulk. The Hulk obviously does not do this, but still the idea of this happening and for the Hulk to choose to not help is so incredibly sad. Jim accepting his fate is horrible. I still cry at this issue to this day.
Well that’s five of my tear jerking issues from comic books. Do you have any yourself? I am curious if there’s something out there that you guys cry at yourself. Whether it be happy or sad. Let me know!
Check out my Patreon page over at: Patreon.com/GayComicGeek
My Facebook Page: Facebook.com/TheGayComicGeek
My YouTube channel: YouTube.com/TheComicBookGeeks
My Instagram Page: Instagram.com/GayComicGeek 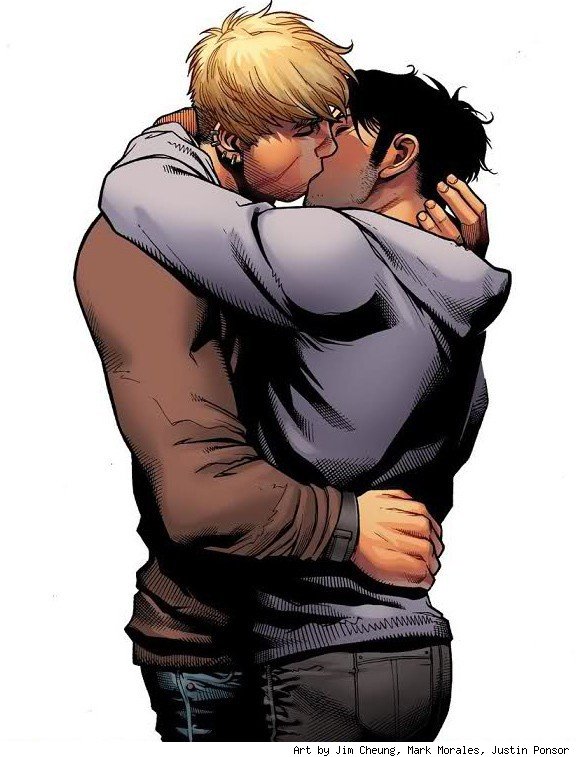 Bonus – Not to end on a bleak sad note. Something that brought a tear to my eye was to finally see long time boyfriend Hulkling and Wiccan share their first on-panel kiss in Young Avengers Children’s Crusade. They had dated for some time and the reader knew that they were together as couple, but for reasons, they had never been shown to kiss. Finally in issue number 9, this was fixed. 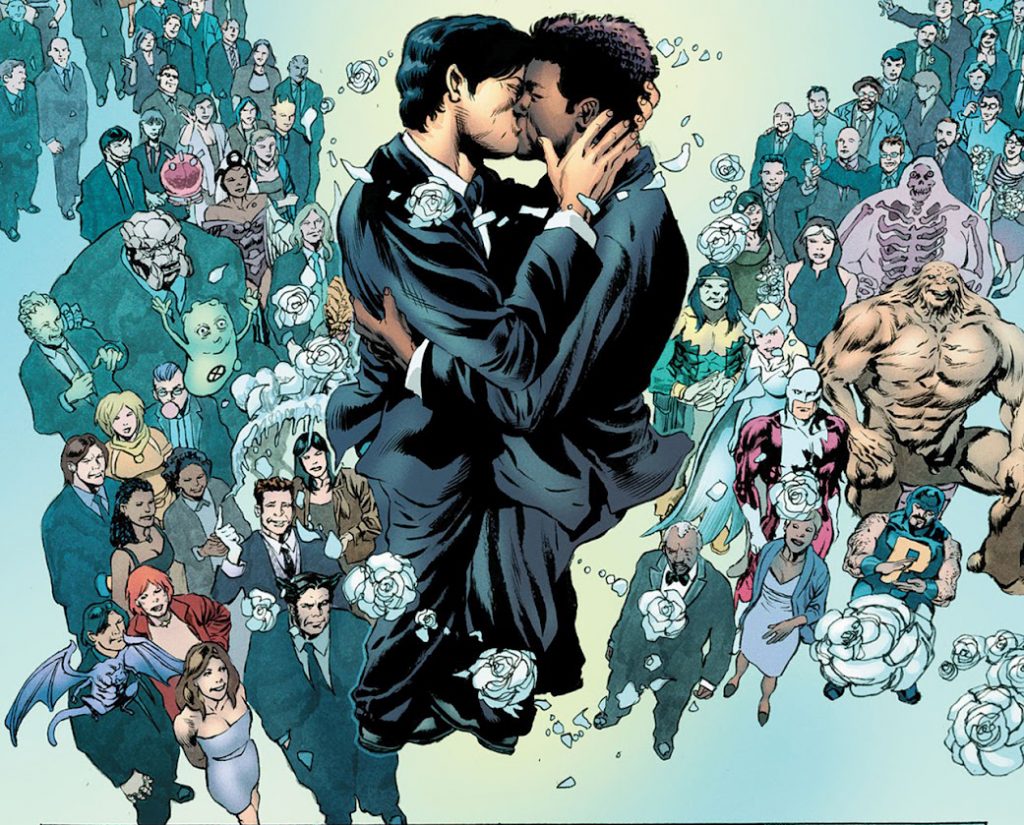 Also, the wedding of Northstar to his boyfriend Kyle Jinadu in Astonishing X-Men #51 is totally crying worthy on its own. 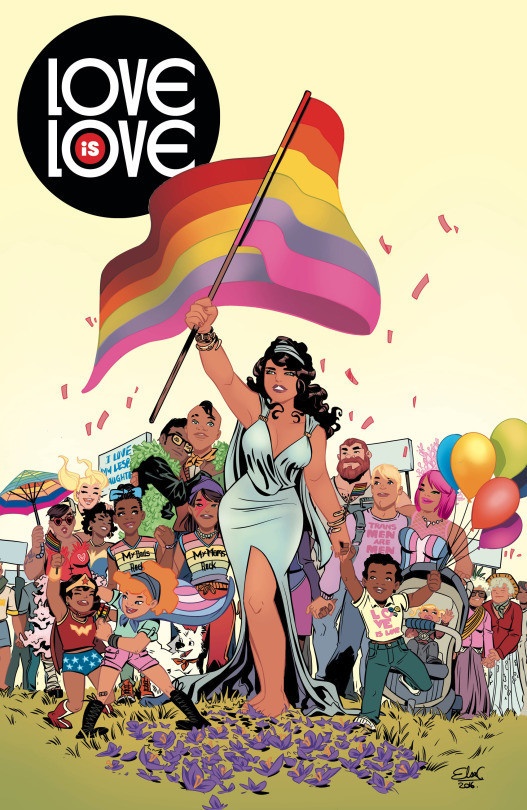 3 thoughts on “Any Comic Book Moments That Make You Cry?”