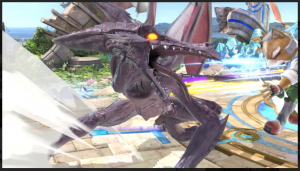 Did anyone else watch Nintendo’s E3 Conference? They had a lot going on but the thing that caught my eye the most was the new Super Smash Bros. Ultimate. From what they announced there will be EVERY PLAYABLE CHARACTER from every past Smash Bros games. This is really big news for gaymers, such as myself, since we lost amazing characters like Pichu and Snake in the newer games. With that said there was a lot of people wanting Ridley from the Metroid series to be a playable character since Melee was introduced. However, the closest we got was him as  NPC and boss in Brawl. Today Nintendo brought the amazing news that Ridley will be a playable character in the upcoming Smash game for Switch. If you se the footage you can also see one of his skins is his Meta-Ridley form which is downright the coolest form he has gotten.

Anyways this is a game I will be picking up day one and playing with my buddies. What gaming news got to you from this years E3 conference?

Oh My Glob! WHO IS THAT SEXY GEEK WITH HIS VERY OWN COMIC BOOK!??